It's funny that Holly captured that moment in the photo right there. That's the moment in the spring game where my wife laughed at me because I was all "easy... EASY..." as Isaiah Williams was being tackled. I view spring game tackles like my kids are out there. Any twisting, pull-down tackle where a foot might be pinned under something causes me to freak out. I'm really not built to be a football fan.

To the questions. This set of questions comes from Twitter:

How much personnel and scheme change is there from being mostly under center to mostly shotgun?

I'm gonna be totally and completely honest here. I read your question and thought two things:

I'm telling on myself here, but I don't really notice such things. I'll have friends who are all "wow, pistol formation on first and third down that series" and I'm always like "yeah, totally" and then inside I'm all "which one is pistol again?" while trying not to show that I faked my agreement. If there's a continuum between "watch the game while paying attention to scheme" and "watch the game while playing attention to individual performances", I'm like 97% individual performances. If you've ever had a conversation with me after a game and you say something like "wow, what a run by Chase Brown on that play", there's a decent chance I faked my answer because I was watching Pat Bryant block.

It's yet another reason why I've always made the argument that I'm the safest "media member" in history to watch practice and then write about it without opposing coaching staffs learning anything. I wouldn't write about scheme stuff because I'm never watching the scheme stuff. I want to know if that redshirt freshman linebacker has made a leap from last season because if not, we might be in trouble defensively in 2024. I do care about defensive formations (is this a 3-4 or a 5-2?), but I apparently don't care about shotgun vs. under center.

So I'll just say this. I made a Kerby Joseph gif this morning from the Penn State game. And while I had the video open I watched all nine overtimes. During that two-point-conversion-off, I think we were only under center for one play (the rollout by Sitkowski that Josh McCray dropped). I know that probably has a lot to do with "if you're not going to run it, put your QB deep so he can see the full play as soon as possible", but still, the most recent Illinois football I watched had us in shotgun a lot last season.

It's still funny, though. Since we don't get to watch live football during spring practices anymore, I totally missed that we were in shotgun a bunch during the spring game. I was completely lost in "now I'm going to watch this guy and then I'm going to watch THAT GUY" glee.

For this next one I'll have to use a screenshot. For whatever reason, if your Twitter username has an underscore in it, I can't embed that tweet. Hashtag website probs. 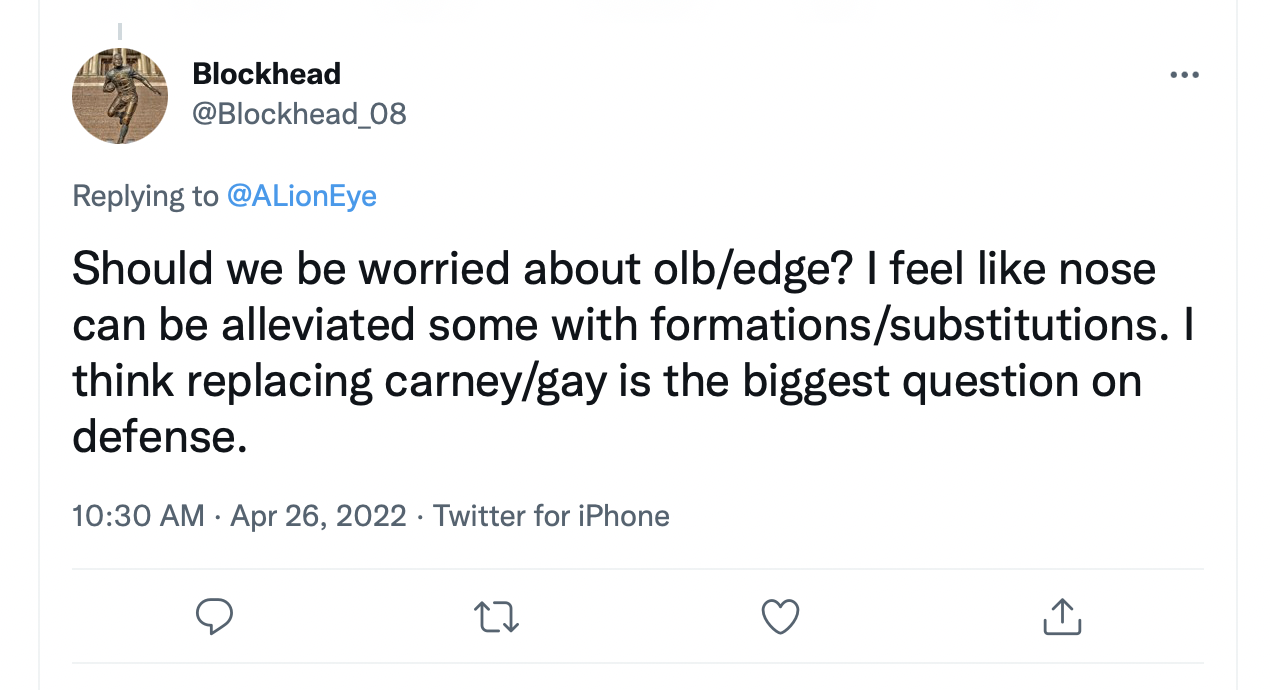 Seth Coleman enters his sophomore year this fall and Ezekiel Holmes his junior year. Last season, as the backups to Carney and Gay, those two combined for 4 TFL's and 2 sacks. Can they crank that up this season? Better yet, is either ready to make The Leap?

Neither Carney nor Gay were ready for The Leap in 2019. Which is why both were eventually passed on the depth chart (Gay by Ayo Shogbonyo, Carney by Wole Betiku). So I think that's a good way to look at the defensive ends -- sorry, "outside linebackers" -- in 2022. Shogbonyo kinda came out of nowhere in 2019. Is there a guy like that on the roster who could pass Seth Coleman? I'm not sure there is. And Carney was passed by Wole Betiku - is there a transfer who might be ready? That transfer is Alec Bryant from Virginia Tech, and he's quite talented, but he's also just a redshirt freshman.

But we saw the on-the-field struggles from Carney and Gay starting in 2017 running through 2019. They learned on the job. Coleman and Holmes haven't played as much as that (probably not even 1/3rd of that), so I feel like we're going to have to watch a lot of learning on the job. And that has me concerned.

So yes, you should 100% be concerned. Sorry I can't sell you much hope.

My goodness, how rude of me. How could we be this far into the spring - a spring with a long-snapper battle - and not have spent at least four paragraphs talking about 'snappers? Forgive me.

First snap of the spring game was Aiden Hall (which gives you an idea who is the first-string longsnapper). Hall has been waiting a long time for his chance. He arrived in 2019 from Benet Academy and redshirted. But then the 2020 season gave Ethan Tabel and extra year of eligibility, so instead of taking over in 2021, it looks like Hall will take over in 2022. He's a fourth-year guy now, but only a redshirt sophomore by eligibility.

Let's go to the tape and see how he did. Here's Hall snapping to Hugh Robertson for that first punt:

And let's check the snap location:

That's what you like to see. Fastball right down the middle.

Now let's go to the second snap going the other way. Once again Robertson is punting, once again Hall is 'snapping. There's no rush on punts in the spring game, so this play is all about how well He snaps it and what kind of spin our 29 year-old Australian police officer can put on the ball.

This snap wasn't as good as the first one. Didn't bounce it, didn't sail it, but He didn't exactly put this one in the strike zone:

BUT, He was the first one down the field with the gunners and after Hugh Robertson got some backspin on his gap wedge at the four, who downed the ball? The longsnapper: 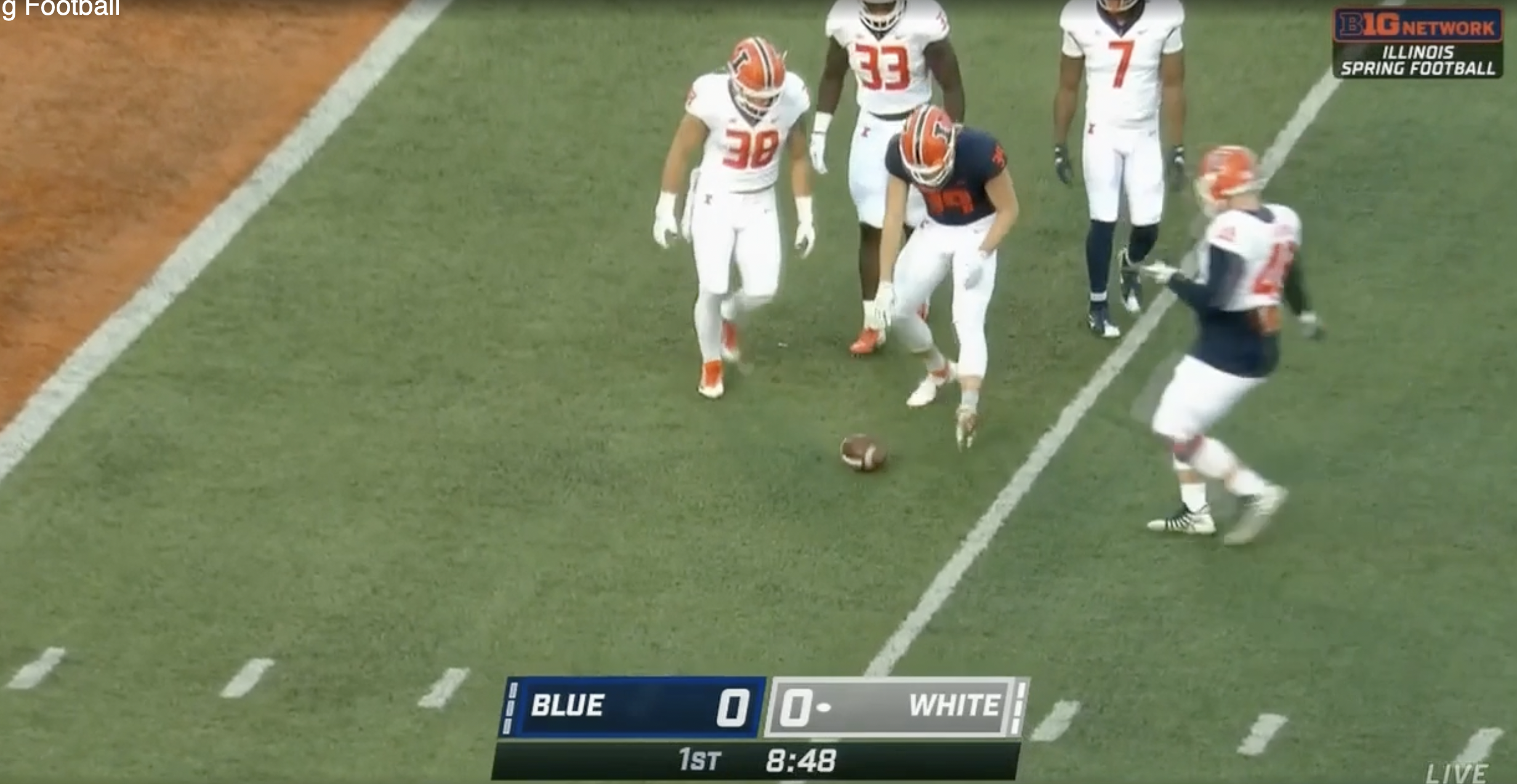 Behind Hall is Lane Hansen, Jake Hansen's brother. Whenever backup punter Fabrizio Pinton was punting, Hansen was the one snapping to him. So if you're looking for depth chart right now, it's 1) Hall and 2) Hansen.

But another longsnapper arrives this summer. Nico Crawford from Dublin, Ohio committed to Illinois in February (as a PWO). So there might be a full-on snap battle in fall camp between Hall, Hansen, and Crawford.

Snap Battle 2022. Hall, Hansen, and Crawford all try to knock water bottles off of a student manager's head (wearing a helmet, of course). Maybe put them in a triangle all snapping to the same spot in the middle. Entire team surrounds them, the music gets louder......

Please make sure that student manager is sitting in a chair, or whatever device you need to ensure the water bottle is at the chest height of our punter. The last thing we want is any snapper muscle memory of footballs sailing over helmets!

We’ll an Eminem reference was the last thing I thought I’d see in this post but I like it!

An entire post without a McTackles update? What am I even paying for then?