This one will be completely different. I'm not going to go through my typical LLUOI process because, well, because I watched Isaiah Adams in practice this spring and in the spring game. So why go through juco film (or even high school film) when I've seen him play football directly in front of me? 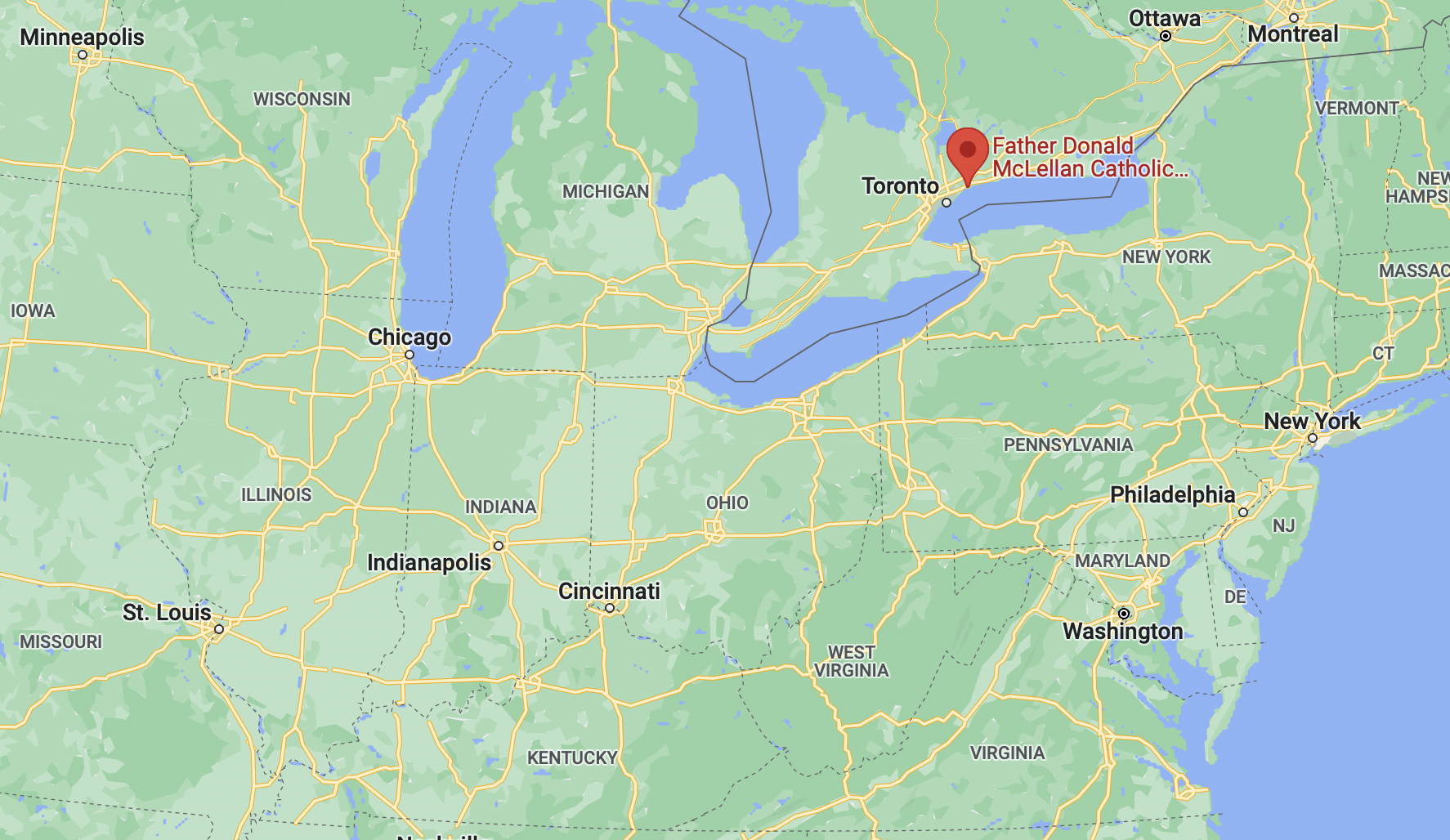 + He then heads off to play college football in Canada at Wilfrid Laurier University (go Golden Hawks!). WLU is located in Waterloo, Ontario. If you want to know where that is (I did), it's here: 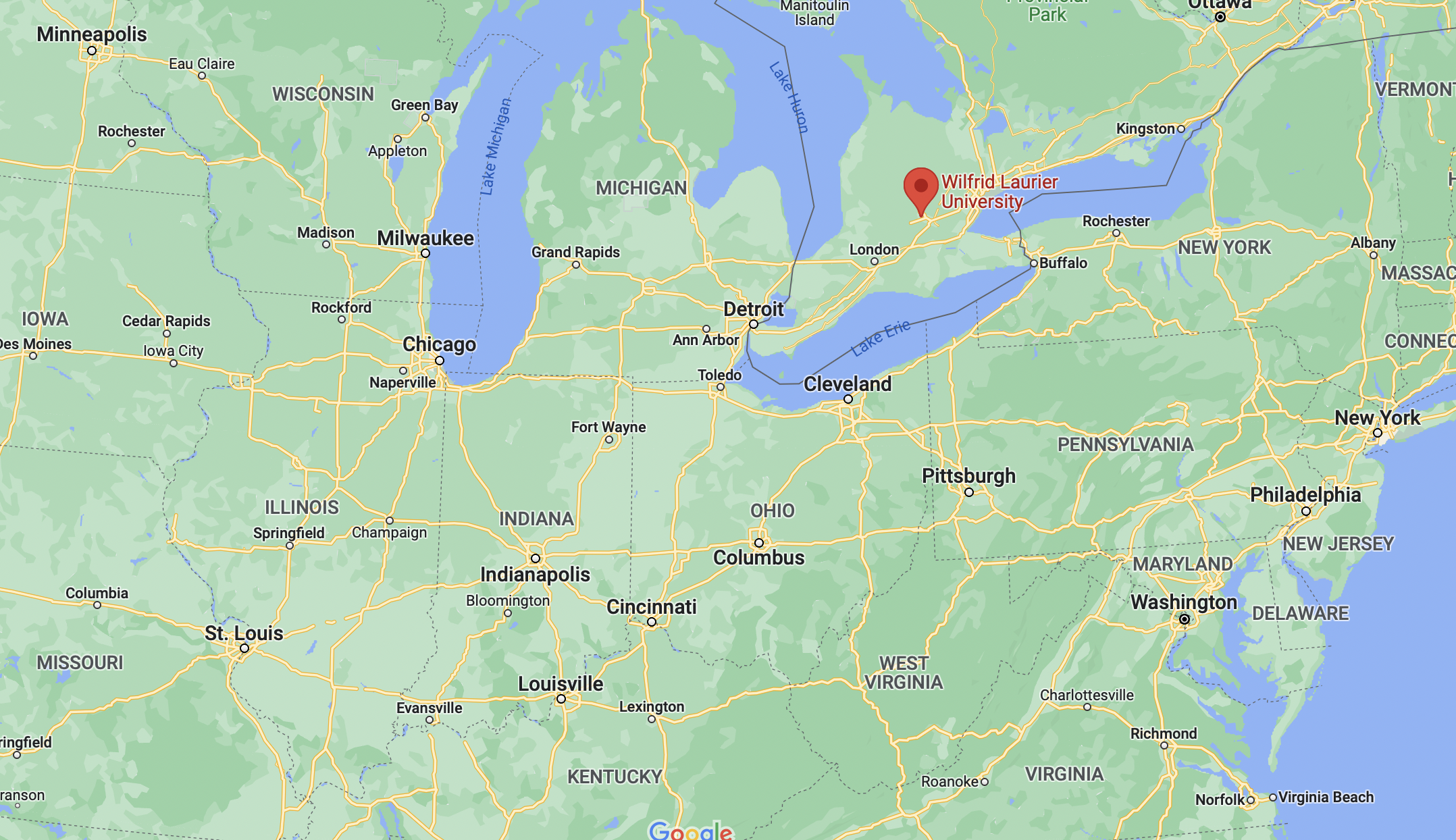 I screencapped that one with a different zoom so that London, Ontario would show up on the map. London is the hometown of Chase and Sydney Brown. So we've got Southwestern Ontario on lockdown.

What's that? You want to know what the football stadium looks like at Wilfrid Laurier University? What am I, your screencap assistant? You think you can just ask me to screencap whatever you want to see?

Actually, I am kind of your screencap assistant. You go to work and you make money and then you give a little of that money to me and I screencap things for you to look at when you don't want to work. Here's the football stadium at WLU: 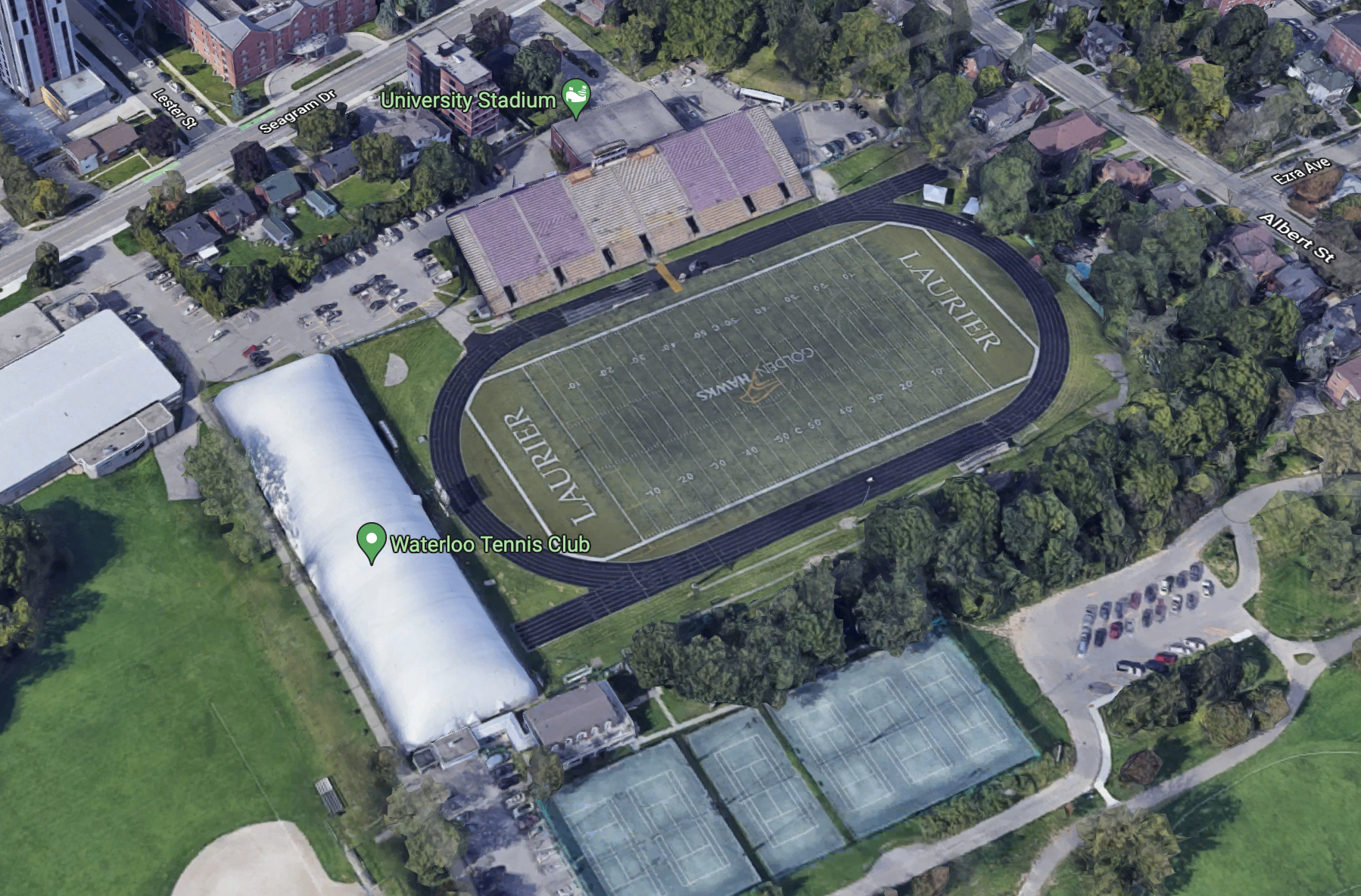 + After two years at Wilfrid Laurier University -- the second year lists him as "Academic Year: 2nd Year; Eligibility Year: 1" so I guess he did the Canadian version of redshirting that year? -- he transfers to Garden City Community College in Kansas. So that would be a Canadian Redshirt in 2018, a season at WLU in 2019, and then he transfers to Garden City in the summer of 2020.

Hmmm... this just occurred to me. Perhaps he transferred because Canadian football was canceled in 2020? I need to look this up now. Let's do that together.

According to this tweet he announced he was transferring from Wilfrid Laurier University to Garden City Community College on July 6, 2020. Now let's see when Canada canceled their college football season. Yep, this article says they announced that fall sports were canceled on June 9th. So June 9th he finds out his college football season is canceled and July 6th he transfers to Garden City CC in Kansas to try to play juco football that fall.

So that begs the question... when did he learn that junior college football in the United States was being moved to the spring?

{does some more Googling}

Looks like it was announced on July 13th. So that paints a fairly clear picture. Canadian college football is canceled June 9th, 2020. On July 6th he announces that he's headed to play in the United States. And then a week later, junior college football is pushed off until the spring. Reminds me of Roderick Perry in that way. FCS football was moved to the spring in the summer of 2020. He transferred to Illinois. A few weeks later, the Big Ten canceled football for the fall (and then later changed their minds).

It is now when my lack of knowledge of all things Illini media might come into play. I'm all "did you guys know that he came to the United States because Canada had canceled football in 2020?" and you might be thinking "yes, Robert - we know that. It's literally his entire story. He's shared it on nine podcasts and in 15 different articles." Well, it's news to me. So it's going in the LLUOI.

+ He plays two seasons in eight months at Garden City - eight games in April and May (the delayed 2020 season) and then 11 games in September, October, and November. At the end of his second season there, he's a first-team Juco All-American. He gets 17 FBS offers (Power Five offer list: Arizona, Colorado, Illinois, Kansas, Minnesota, Syracuse, West Virginia), visits three schools (UCF, Kansas, and Illinois), and picks Illinois.

Then he enrolls in January, goes through all 15 practices during spring ball, plays in the spring game, completes an entire semester of classwork, and NOW I'm getting to his LLUOI. See that photo at the top? That's him playing left tackle in the spring game. And here I am all "looks like he'll be playing football at the University of Illinois!"

I will now get to my evaluation of him. Actually, let me first write the "where he fits" part.

The big question is tackle or guard. Which is the same question as Alex Palczewski (Palcho played half the season last year at tackle and then flip-flopped with Julian Pearl and moved in to guard while Pearl moved to tackle). Between those three guys you likely have your starting left tackle, right guard, and right tackle. The question is which player goes where.

Julian Pearl didn't play in the spring game (rehabbing a broken thumb) so it was Isaiah Adams at left tackle and Alex Palczewski at right tackle with the other juco OL recruit, Zy Crisler, at right guard. Once Pearl returns in the fall, he either goes to left tackle or right tackle (but not back to guard). So this whole thing is basically a question on an exam:

NOW the evaluation part. Plus signs are finished. Time for some dots:

The thing to get excited about: run blocking. The thing that worries me: pass blocking. The key to this whole thing: how quickly he can pick up a complex scheme in the 35 practices (spring + August) before he needs to be out there on the field. The thing that bodes well there: he was also a Juco Academic All American and, in the two articles I read where his juco coach was quoted, the coach talked about how smart he was in the film room. Underrated aspect of playing offensive line in the Big Ten: a full understanding and appreciation for how the offensive scheme works.

That's the hope this fall. He picks up the scheme (and the higher level of football) very quickly and is one of the starting offensive linemen. It's a lot to ask -- how many juco linemen have we brought in only to see them look incredibly lost their first season? -- but here's hoping that this long journey from Canada to Kansas to Illinois has prepared him for the Big Ten.

Not sure why this is a thing to me but interesting that the Canadian College football field is also 110yds with larger end zones.

And yes Robert EVERYTHING was cancelled in Canada in 2020. ??

Cool moist conditions in the PPR should provide adequate nesting opportunities for most species. Wet conditions along with high input costs may limit farming in marginal areas where ducks are nesting increasing nest success!

The track cuts off the corners of the endzones!

Having spent three years living in SW Ontario in the Aughts, I can tell you Canadian football is fun to watch. You have the longer field and larger end zones, but also guys in motion moving forward before the snap plus they only play 3 downs not 4. That results in throwing the ball more to get first downs and you go for it on 3rd down more than US teams go for it in 4th down. The level of play is not as good as high level CFB in the US but it is most definitely fun to watch.