I've done it again. I started a Looks Like University Of Illinois post, the preamble turned into an actual amble, and by the time I'm done ranting, I'm three hours in and haven't even talked about the player yet. So, just like I've done so many time before, I'll pull that text out of the post, make it its own article, and then finish the LLUOI post later.

Basically, I started talking about why I began writing LLUOI articles in the first place. And that always leads to a "does no one ever watch film ever? are stars just assigned based on destination?" rant. So I will now give you that rant. And then I'll go finish the LLUOI article. I promise.

The entire goal when starting LLUOI posts in 2014: get a more accurate ranking of Illini recruits since the recruiting services have seemingly switched to a system where "size of potential subscriber base" is considered when handing out player rankings. I can feel the rant boiling up so let me just get it out of the way. Time to trash Texas.

Perhaps you saw a tweet similar to this after the draft wrapped up on Saturday:

32 players drafted from the state of Texas, 0 from the University of Texas. I mean... that almost suggests that four years ago (let's use the 2018 recruiting class), players going to Texas were given a higher rating because Texas has a massive fanbase and those fans will subscribe to your recruiting site if you tell them their recruits are all super awesome. So let's go look up the ratings for Texas HS players from 2018 (remember, the vast majority of those 32 draftees who played high school ball in Texas were on this list). Get ready to laugh: 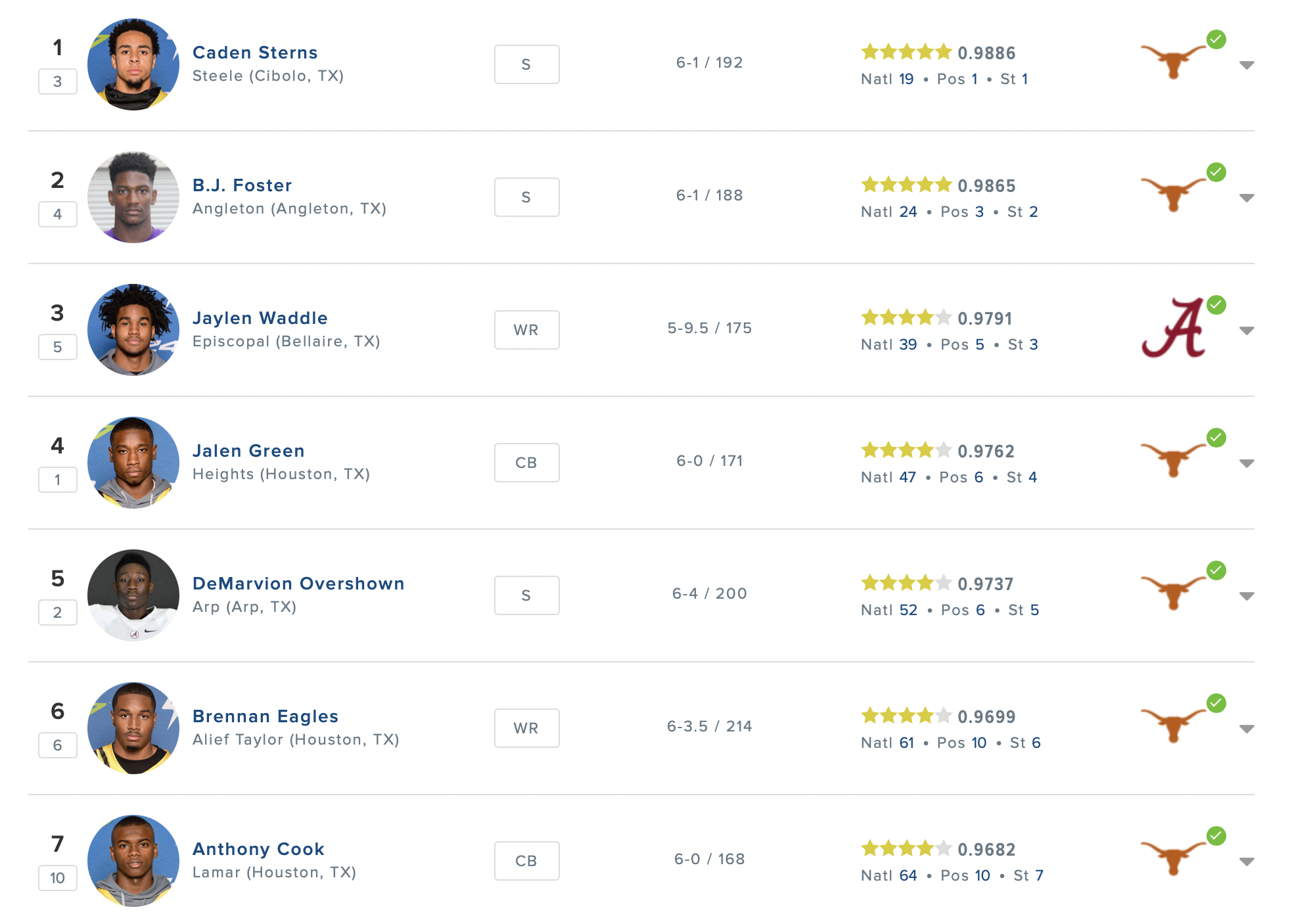 Go check out the list for yourself. Of the top 15 players in the state of Texas (per those rankings, at least), 11 were going to Texas, 3 to Texas A&M, and one to Alabama (Jaylen Waddle). And of those 11 players who picked Texas, one made the NFL (Caden Sterns, the #1 player there, who declared early and was drafted by the Broncos in the 5th round last year) while the 2022 NFL draft just went by with 32 players from the state of Texas drafted and none from the Longhorns. It's almost like... I don't know... maybe the ranking system exists in part to sell subscriptions to a massive fanbase and not to actually, you know, determine which players are the best players?

Me: "Maybe... come up with a system where someone actually evaluates the players instead of heavily weighting rankings based on college destination?"

ANYWAY, I got sick of it and started my own ranking system using Tom Cruises. And I feel really good about the results so far (I'll have a database to show you at some point this summer). It's a harsh exercise at times (giving Desmond Dan one Tom Cruise is very rude, and when I gave Peter Cvijanovic one Tom Cruise I got a three page letter from his dad telling me how wrong I was), but I didn't understand offering Dan a transfer spot and I didn't understand offering Simon's brother who didn't appear to have the frame for a Big Ten lineman. Around the same time that Desmond Dan transferred in there was also a running back from Western Michigan - some guy named Chase Brown - who I awarded 3.5 Cruises because I saw a Big Ten running back there.

I should note - I kinda "cheated" for that one because I got to see him in person. We found out about Chase Brown on the first day of training camp that year. It was a simple "Sydney Brown's brother has transferred in from Western Michigan and he's out there practicing right now" announcement. Getting to evaluate someone in person is very helpful.

But that's kind of my entire point here. I'm not some football expert. I wouldn't make a good scout or anything. I just take the time to do it. I'm simply an obsessed fan who is watching Hudl film while you're watching a baseball game or the NBA playoffs. Taking the time to do it is 90% of the battle. And I don't understand why Rivals or 247 or ESPN hasn't hired a team of evaluators to do just that. (Although, I guess, those evaluators would be under intense pressure to bump the kid committed to Tennessee and lower the ranking of the kid committed to Wake Forest so it would need to be done blind.)

Since I mentioned the Chase Brown thing (and let me be honest and note that I don't nail them all - I gave Kerby Joseph 1.5 Cruises), I just looked up the Chase Brown LLUOI. I wrote his LLUOI when I returned from my first of two trips to training camp that August, and as part of the article, I made a list of pleasant surprises (including Brown). This was published on August 7th, 2019:

This was the camp where we got to see Marquez Beason and Shammond Cooper for the first time. I was super excited to see Big Moses in uniform. And to see if Isaiah Williams was really a quarterback. Those players were all out there on the field, but the list I compiled noted Casey Washington's hands, Tarique Barnes' readiness, Keith Randolph's potential, and Chase Brown's Big Ten Tailback-edness. All I need now is for Jakari Norwood to blow up at Temple and then I can claim I went 5 for 5.

And you could have gone 5 for 5, too. If you took the time to go to as many Illini football practices as humanly possible, you'd also be able to plainly see that Washington, Brown, Randolph, and Barnes were probably the top freshmen on the field. I'm being serious. Time is 90% of it.

I feel like it's the same with evaluating our recruiting classes. In the 2020 class (only four players remain from that class), I had the top three players as Reggie Love, Deuce Spann, and Johnny Newton. In the 2021 class (only 15 players remain), my top three were Brody Wisecarver, Pat Bryant, and Josh Kreutz. Wisecarver has now transferred out, but I feel great about five of those six evaluations. Those were not the top players in those classes. The top four in 2020 (per the composite rankings): James Frenchie, Reggie Love, Trevon Riggins, and Cooper Davis. Top three in 2021: Wisecarver, Samari Collier, and Daniel Edwards.

My point: you could do this, too. It just takes time. It takes these 6-8 hour dives into each player. As I've always said, I could send my mom to a week of training camp and she'd say "wow, that Casey Washington guy catches everything at practice". NFL teams invest hundreds of evaluation hours into each player. College recruiting staffs do something similar. For the NFL draft, PFF (for example) has a team of evaluators who watch every play from every single player and then give you their rankings. For college recruiting rankings, it's... uh... 1/50th of any of that? 1/100th?

At some point, PFF (or someone similar) will start evaluating high school film the same way. And the rankings will look completely different. Never again will you see 11 players going to Texas all ranked as high 4-stars or 5-stars - all somehow in the top-150 players nationally - with only one of them deserving of a ranking higher than a 3-star. In my view, the accuracy of a system like that will eventually be more lucrative than the current system of pandering to large fanbases for subscriptions.

But for now, we don't have a system like that. So until that happens, I'm gonna keep Cruisin'.

What's that? I'm four months behind? You're correct. Damn, that was harsh. But honest. Thank you for your honesty.

I'll get back to it starting right... now.

Sounds like Matthew Bailey is getting more Cruises than expected. :)

You are so correct. Fans love the four stars. What % of four stars don't pan out? The % would be higher if the four starts that are 3 stars were called that correctly. I think using two star rankings would help tilt the rankings to higher accuracy. That ain't gonna happen